R A Brown Heating Services scooped another award at the Heating & Renewables Awards 2015 event, which was attended by 500 of the industry’s leading figures, at the Ricoh Arena, Coventry on Thursday 10th September 2015.

We are celebrating winning Air Source Installer of the Year 2015 after being shortlisted for two awards at the event.  This is the second award which R A Brown has won this year, having won the H&V News Award Retrofit Project of the Year award in April 2015. 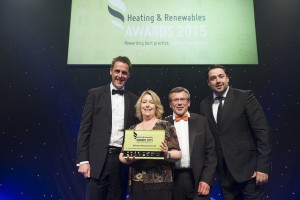 The Awards are organised by A&D Publishing, publishers of the Renewable Energy Installer.  There were 15 winning projects, installers and products which were announced by host and comedian Mr Jason Manford.