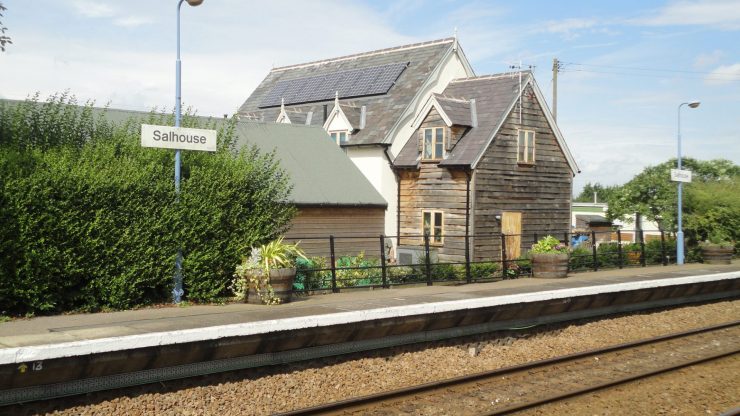 When our customer, a retired surveyor, bought the original Station Masters House at the end of 2009, he was looking to convert it to an eco-friendly home, but the original house, built around 1875, was completely dilapidated, with major structural issues.

The once charming character of the property had been destroyed over the years from subsequent alterations. In the 60’s, big plastic picture windows had been installed and at some point through the decades, a hard cement rendering had been covered on all external walls that had allowed a substantial amount of moisture to soak in over the years.

The task of renovating the original Station Masters House, as it stood, was vast and was going to take a lot of time, money and effort to restore.

Therefore, it was with a heavy heart that he took the decision to pull down the property and start again from scratch, but pledging that where possible, all materials would be recycled from the original property and that the new build must resemble the character and look of the original home.

The old Station Masters House was carefully taken down in order to save as many of the original materials as they could. The new build then started in January 2010, with the family living in caravans on site, amidst one of the worst winters on record.

The floorboards were reclaimed and reused to cover the living room floor and upstairs bedrooms. All the bricks from the original house that had been covered over in cement rendering, were cleaned off one by one and reused in the build of the new house.

A company specialising in oak framed properties, provided the oak frame for the new property and the SIP’s panels. Also incorporated into the build was extensive sheep’s wool and plastic insulation. The house frame provided in kit form, went up very quickly and it wasn’t very long before the heating and hot water system was being installed. 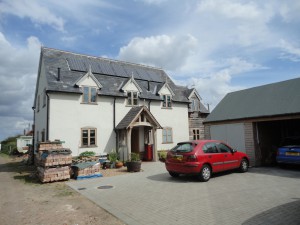 Richard Brown, Managing Director of R A Brown Heating Services Ltd, designed an air source system that could provide all the heating and hot water for the property. He specified a NIBE air/water heat pump that would provide under floor heating to the whole of the property and having three bathrooms, enough hot water to satisfy the property’s needs.

R A Brown Heating Services Ltd have been installing NIBE Heat Pumps since early 2008, with a substantial combination of both air source and ground source installations now under their belt, they are virtually experts within the renewable technology arena!

The small fact that Richard Brown, Managing Director of R A Brown Heating Services Ltd, has a NIBE air source heat pump installed, not only in his own home, but in the new showroom in Horsham St Faith too, means that he can clearly speak from experience when discussing the benefits of this renewable technology.

Richard was also lucky enough to win a trip in April 2011 to the Ice Hotel, Sweden, courtesy of NIBE and comments “If a Hotel situated in the Arctic Circle, that experiences really extreme temperatures on a regular basis, can be heated by NIBE heat pumps, then I am pretty confident that a NIBE heat pump can cope with the demands of the rather milder climate that we experience here in the UK!”

Also installed on the property are a series of 7 Photovoltaic Panels that provide an independent electricity supply to the property, and work by capturing the sun’s energy from a series of collector panels situated on the roof.

The R A Brown customer comments “The NIBE system has been 100% reliable. We went away in the winter and I had set the temp down and when we got back the weather had gone quite bad and I set a boost to get it back up to temperature and it got warm remarkably quick! I was very impressed!”
He adds, “The NIBE heat pump is extremely quiet. To say that it is installed under my daughter’s downstairs bedroom window, she is never bothered by it. We will always have a heat pump now and I would definitely recommend NIBE air source heat pumps”.

He also reports that due to all the renewable technology he has installed on the property, he now has a net annual electricity bill of £100, clearly confirming that anyone can certainly benefit from green energy.