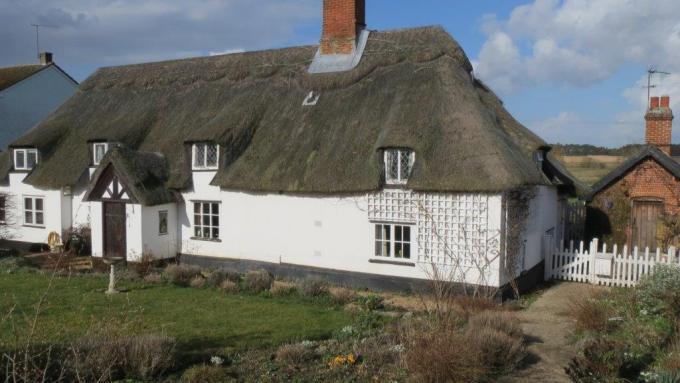 Our customer had a twin ground source NIBE 1145 heat pump installed in his thatched cottage in South Norfolk.

“Our house combines ancient and modern. About 50% dates back to 15th Century whilst the remainder is 1970’s extension. Insulation of the older part is difficult as the walls are timber frame/clay lump South Norfolk Thatched cottage

We previously had a high efficiency condensing oil boiler which ran 18 radiators, supplemented by a wood burning stove. The boiler would typically run for 2 hours in the morning and 6 hours late pm/evening. Unused rooms would not be heated. Last year we spent £2200 on oil.

My wife retired last year and was spending more time at home. We were finding it difficult to justify running oil boiler for longer hours. In practice, this meant that during the daytime she would only use the room(s) that were heated by the wood burning stove.

We decided that we needed to address our heating needs, and energy consumption/costs, in order to make life more comfortable and affordable as we moved into our retirement years.

We looked at both air source and ground source heat pump systems. We chose ground source due to its claimed higher efficiency and also because we had sufficient land to lay out the collector pipework.

We took three quotations which were all within 10% of each other for the basic installation. Although they were not the cheapest, we chose R A Brown because of their hands-on approach and their experience in heat pump installations.

The installation included partial underfloor heating (to replace radiators), upgrade of hot water provision which had previously struggled to meet our needs, cavity wall and loft insulation upgrades (where possible).

The installation was completed within the timeframe quoted. The R A Brown engineers were thorough, polite, and communicative. Dust sheets were extensively used to minimise soiling.

The system was commissioned on 22nd October 2013. The NIBE control panel can be a little intimidating but the R A Brown engineer talked us through it and left us with sufficient knowledge to make adjustments as the system bedded down.

We have monitored performance closely.

It is not possible to make direct comparisons with the previous oil fired system because:

1. We have also upgraded insulation levels (where possible)

2. This winter has been relatively mild compared to last winter

3. We now have a house in which virtually all rooms are heated 24/7, whereas previously our oil boiler ran for around 8 hours/day and unused rooms were not heated

The hot water (baths and washing) temperature is lower than it was from our oil boiler but this is not a problem. It is typically 48 – 52C. We could change the NIBE settings to increase water temperature but that would result in a higher energy cost.  A 300 litre hot water cylinder now means that we can have a house full of guests and still have sufficient hot water

The NIBE outside temperature compensation control system works well and, after making a few tweaks during the early weeks, we have not needed to make any further adjustments”

Based upon our first five months, we are very pleased with our NIBE installation. It has met all of our objectives and the running costs are in-line with expectations. It has transformed the house in that we are now able to make use of all rooms 24/7, rather than huddle around the wood burner. R A Brown provided a very good service and we would have no hesitation in recommending both NIBE and R A Brown to any prospective purchaser”

Latest Projects by R A Brown

END_OF_DOCUMENT_TOKEN_TO_BE_REPLACED

See R A Brown at Work

Here are some of the latest awards we have won.

END_OF_DOCUMENT_TOKEN_TO_BE_REPLACED

We are proud members of:

Latest News from R A Brown

END_OF_DOCUMENT_TOKEN_TO_BE_REPLACED

Have our renewable energy newsletter delivered straight to your inbox.