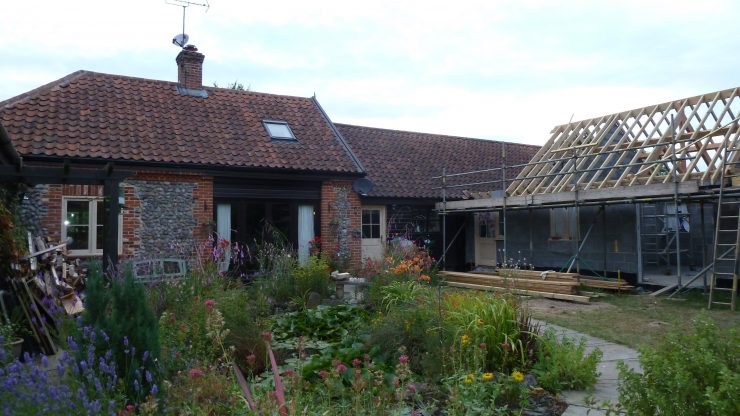 Mr & Mrs M have a barn conversion property which they were extending, in addition to renovating the existing property.
Their property is part of a complex of barns, and the extension was to form an annexe with separate bathroom and kitchen.

Mr & Mrs M had met Richard at the annual Greenbuild event at Felbrigg and R A Brown had been recommended by their neighbour as they had also had an ASHP installed through R A Brown.

Mr & Mrs M made the decision to replace their old oil system, which was proving very expensive to run and maintain.  They considered replacing their old oil system with a new oil boiler and radiators, however after much deliberation and looking to the future “we decided on renewable with the help of government RHI scheme.  Even at today’s oil price* the cost of running the air source heat pump compares favourably against the old oil system”

When looking at the heat load requirement for the property, it could not be met with one single phase heat pump, so two 12kw ASHP’s were installed to be able to meet the heat load. 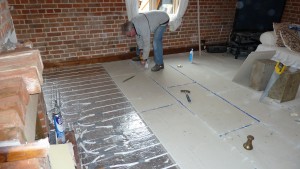 Underfloor Heating was fitted through the new section of the property on ‘staple and screed’ and through part of the original building, the lounge, kitchen part of the hallway, using an overlay system.

Mr M laid his own boards on the overlay system allowing him to reduce labour costs and this was planned into the project timescales.
R A Brown offers a bespoke design service through their Technical Designer, Silviu.  Mr M said he felt “the design was well thought out and very flexible which suited our timetable”

Mr & Mrs M have said “we would recommend this type of installation to others due to the reduced running costs, it is very clean and the system runs itself, we don’t have to think about it”

Mr M commented “The engineers who installed our system were very good, and post installation we were pleased at the work completed to balance the system”
*approx. 31.5p/litre